We hoped for a “ducky” day!

Sunday, May 5, was our ANS Birdathon day for Diane Ford and me.  Diane is a birder and a bird artist; she did these sketches. Thanks, Diane!

By the time Diane got to my house at 7:30, I had 17 bird species on my backyard list. She added the ones she’d seen or heard as she was driving through Rock Creek Park, which brought us to 32. The weather forecast was for a partly cloudy day, highs in the mid-60s—a good day for birding, but cool for this time of year.

We knew I’d be doing less walking this year because of my bad knee. We tried to “bird smarter”: we’d make every birding site do its best and then we’d be back in the car.

Our first stop was Aspen Hill Park, whose trail along Rock Creek was popular early—several gaggles of runners passed us. The song of a Common Yellowthroat cheered us with a promise of other warblers. In turn, we cheered a newly arrived Yellow-throated Vireo singing his lazy song in a creek-side sycamore. The sibilant calls of Blue-gray Gnatcatchers attracted our attention, and Diane found their lovely lichen-decorated nest. 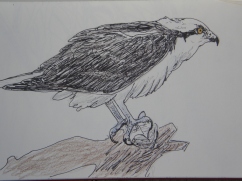 Diane left the path to investigate an interesting song. When she returned, I pulled out my cell phone with Sibley’s birding app, and she confirmed that it was a Blue-headed Vireo. There are times when technology is really great.

Next stop: Lake Needwood. As I was parking by the Visitor Center, “Ooh!” said Diane and took off as soon as the wheels stopped. Ah, an Osprey! The beautiful big bird perched on a bare branch above the lake, eating a fish and fending off pesky crows.

We wasted some time trying to pull a non-existent Worm-eating Warbler out of a flock of Yellow-rumps, but did get a Chipping Sparrow, Barn Swallow and Eastern Bluebird from the dam area. Then it was time for the pause that refreshes. This was lucky, as near the porta-potty we heard a special bird—a Scarlet Tanager. He was very close. We pursued, and Diane got him in her scope. Oh, my, he was spectacular. “A maraschino cherry,” Diane pronounced.

The water in the “five finger” end of the lake was too deep for shorebirds this year, but we did find our usual Northern Rough-winged Swallows. A tradition upheld.

Now for Blue Mash. We were met in the lot at 10:50 am by a burst of song from a Common Yellowthroat.  As if they and the Yellow Warblers we found nearby had contrived to challenge the sun, its orb finally broke through the clouds. Tree Swallows were calling, flying, and mating; the first Turkey Vulture was up, and the warming air brought forth the scent of honeysuckle.

The big pond was a washout, so to speak, so Diane went on through the park to the small pond while I returned to the car to rest my knee and keep my ears open. In this “divide and conquer” mode, we texted each other with our discoveries, and had to laugh when simultaneous texts reported White-eyed Vireo on both sides of the park.

We made our usual stop in Olney for drinks, a tick check, and a recount. As we headed out to the western part of the county, our total stood at 63 species, only three less than in 2010, our record-setting year (90 species total).

I pulled into the Riley’s Lock parking lot at 1:30. The day had become lovely and warm; we grabbed our lunches and joined the other people enjoying the outdoors. We spent our first ten minutes watching five-lined skinks and a big black rat snake along with the little boys who were fishing in Seneca Creek. 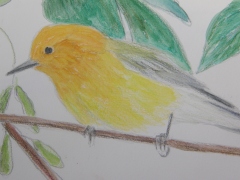 We had barely started on our sandwiches when a loud SWEET SWEET  SWEET rang out from the turning basin—a male Prothonotary Warbler was calling us. Well, not us, exactly, but we ran anyway, and there he was, golden yellow and gorgeous, singing near his nesting box. He was one of our target birds for this part of the canal, so we were thrilled. We crammed in some lunch and started walking the towpath; a bullfrog called his deep notes, turtles were basking, and sweet cicely (no relation) was blooming. Three more Prothonotaries sang—it was a very good year for Prothonotaries! 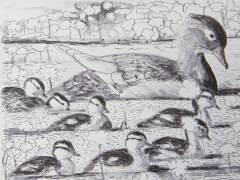 We walked and walked, but couldn’t find any Wood Ducks, either, though I’d seen some there just a few days before. I was achy and ready to turn back, but some fellow birders rode up on their bikes and said they’d seen Wood Ducks farther along the canal, a female with eleven babies. “Eleven babies!” I said, and the aches diminished right away. Of course we had to find that family, and fast. The scene we found was worth every step. The calm and lovely mama duck swimming amid her eleven (yes!) fluffy little ducklings was such a sweet sight.

And our extra walk was rewarded further by an elusive song that we struggled to identify. Tentatively we decided it was not a Louisiana Waterthrush but a Yellow-throated Warbler, tried the Sibley songs on my cell phone and were confirmed. High fives!

On our way back to my car, we paused to watch a Blue-gray Gnatcatcher pulling out beakfuls of tent caterpillar silk. Another lovely nest must be in progress.

After a short trip out River Road (extended) where we lucked into a Kentucky Warbler singing down-slope, we parked at Sycamore Landing Road. To my astonishment, a Rock Pigeon flew over to land on my car. Feathers were missing on its head and neck, but it was obviously delighted to see its new best friends. Diane cooed to the bird (she has 16 pigeons of her own at home) and we found some bread and cracker crumbs to give it. The pigeon was doubtless very sorry to see us leave.

We made one more stop on Sycamore Landing Road, where the scent of blooming autumn olive was strong. But it’s not a good year for Yellow-billed Cuckoo, which we always hope to see here or at Riley’s Lock. Perhaps they are not back yet. I finally heard my first Wood Thrush of the year, Diane found an American Redstart, and we drove off to Hughes Hollow.

The usual vocal Red-winged Blackbirds and zooming Tree Swallows were omnipresent. We got our first Great Blue Heron and tried hard for a Barred Owl we were told had called up-river, but it was just too far for me to walk. Diane planned to walk the dike along the impoundment to check for coots and grebes, but a family of Canada geese blocked the way—the first baby geese we’d seen.

I phoned Lou and told him we were on our way back, but as I was talking to him, I had to report a short delay. Another mama Wood Duck had swum into sight with six irresistible babies. When they vanished into the spatterdock, we called it a day, a lovely day, and headed home, birding all the way.

So here’s the summing up: 85.3 miles driving, 4.9 miles walking, 11.5 hours birding, and 75 species of wonderful birds.  Thanks very much to our sponsors for supporting the conservation and education activities of the Audubon Naturalist Society.