As Diane Ford and I get ready to do another Birdathon for the Audubon Naturalist Society, we thought people might like to see our report from last year, so newcomers to Birdathons can get the idea. We would love your support this year!

Monday, May 9, was our ANS Birdathon day for 2016. The weather was predicted to be cool and cloudy, with mid-day rain. It was about 50° when I left home at 7:45, with 19 birds on my backyard list, including the Scarlet Tanager singing in our woods. On the way to Diane’s house a flying pair of Mallards brought the number to 20. When she added hers (including six warblers–she lives across from Rock Creek Park), our number stood at 41! We were off to a great start. As usual, we hoped to get “at least one more” than we did last year, when a late migration reduced us to 75 species.

Our first foray took us into Rock Creek Park on a trail from Saul Road. Recent floods had both scoured the area and deposited a lot of crap. That, plus the foresters’ cutting of dead ash trees (killed by the emerald ash borer), gave the woods a sad appearance. A busy flock of Cedar Waxwings cheered us, and we had to laugh as we watched two Red-eyed Vireos squabbling over a desirable territory. 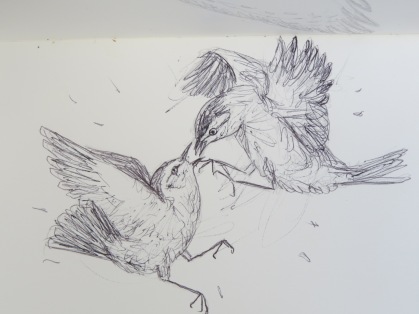 Next stop: Ken-Gar Park. Lovely songs from Baltimore Orioles and a Yellow Warbler greeted us, but the real treat was an American Black Duck, a Birdathon First for Diane and me! He was plucking the wet grass roots with a couple of male Mallards. The foresters were here, too, cutting dead ash trees, so we didn’t linger.

By the time we got to Lake Needwood, it was raining lightly. I pulled up my hood and gave Diane my umbrella. We watched insect-hunting Northern Rough-winged Swallows and Barn Swallows dancing an aerial ballet above the lake. Near the boat dock, we watched a pair of Chipping Sparrows in an amorous encounter. Oh yes, they were not going to let a little rain spoil their fun. That was good advice for us, too. I tried to take to heart what a hardy passerby told us about the rain: “It has a certain charm.”

No Osprey or Kingfisher graced the upper area of the lake, but on one muddy bank I spotted a pensive Solitary Sandpiper, which became bird 59 for our list.

Next, we drove out to Blue Mash, where my car was the only one in the lot. A Northern Mockingbird’s angry notes caused Diane look for the bird’s target. 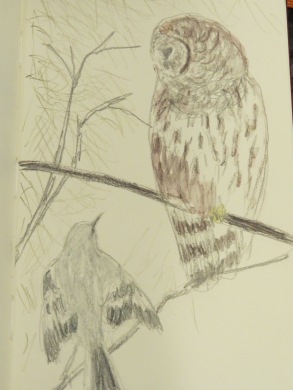 She found a Barred Owl perched high above us. The owl wearied of mockingbird curses and flew away, leaving the mocker victorious. An Indigo Bunting serenaded our rainy muddy slog to the small pond, where the nicely timed arrival of a Great Blue Heron made it worth the trip.

We walked toward the large pond, and were charmed to see a beautiful but silent Brown Thrasher. No warbler song brightened the rain; no swallows were flying about. We were quite damp and hungry by then, so our old oasis, the McDonald’s in Olney, beckoned.

It turned out those warm-air hand-dryers in the ladies’ room work well on wet jackets, too. For the first time on a Birdathon day, we augmented our lunches with hot drinks. The good news was that we had no ticks, and our bird count now stood at a decent 66 species.

Rain was still the story as we headed west on the ICC out to River Road, so we decided to do some ear-birding from the car. Diane suggested trying the Hughes Road polo field, a new spot for our Birdathon.

To our great delight, as soon as we got there and lowered the windows, we struck gold! On Diane’s side, a White-eyed Vireo was singing. From the field on my side came an Eastern Meadowlark’s liquid notes. Hallelujah! We hadn’t heard a meadowlark in years, and in our relief at non-extirpation, we joyfully high-fived.

The grass was quite tall there, so we moved on to where it had been mown at least once. There we had three handsome Eastern Kingbirds sitting on fences. It had stopped raining, so Diane walked on down the road. Suddenly a new bird hopped up on the fence next to a kingbird. “Diane!” I whisper-yelled, “Come back! Bobolink!” By the time she made it back, the bird had dropped out of sight, but it soon hopped up again. While we were admiring the Bobolink, the tinkling song of a Horned Lark gave us another Birdathon First. “I’d say we are rocking it!” said Diane.

We drove out River Road extended, where Diane found a female Hooded Merganser in a little creek, and we enjoyed the energetic songs of a Louisiana Waterthrush and a Canada Warbler. Sycamore Landing Road was a bust; the much desired Red-headed Woodpecker was neither visible nor audible, and the dead ash trees in the hedgerows were real downers.

It was 4:15 when we got to Hughes Hollow with 78 species on our list, happily already four ahead of last year. Two Canada Goose families were in possession of the dike, one with four youngsters, the other with two tiny yellow babies.  We hoped for a bittern amid the spatterdock, but the water was too high. The impoundments were full and a Green Heron guarded the drain between them. Tree Swallows obliged with flyovers and became Bird 79. Bird 80 was an Orchard Oriole singing an aria above the bullfrogs’ bass notes.

Bird 81 was a plaintive Eastern Wood Pewee. In all this richness, I began to hope we might reach 85 species. That would be ten more than last year!

As we advanced along the path, a musical trill caught us. It was a Pine Warbler, feeding in and singing from a (wait for it) long-needled pine tree. Mr. Pine Warbler was Bird 82, and another Birdathon First!

Toad and frog songs drew us farther along the path. In a big vernal pool in one of the fields, seven Solitary Sandpipers were probing for goodies. We already had that species, but it was lovely to see so many in one small area.

In fading light, we hurried to Riley’s Lock. Common Nighthawks “peented” from the river’s edge; now we had 83 species. As soon as we started walking the towpath we heard what we go to Riley’s for: the Prothonotary Warbler. The beautiful egg-y

olk-yellow bird was number 84, our 15th warbler, and also our last new species.

We did go on to Pennyfield Lock, but it was unproductive, so we ended our Birdathon Day. I took Diane home, and arrived home myself at about 8:45 pm.

Text by Cecily Nabors, Illustrations by Diane Ford. Please pledge and support us in 2017!