June is drawing to a close. Our hawks have fledged, but for most smaller birds, nesting season will go on for another few weeks. Example: In the woods near Bel Pre School, I found an active nest last week. An Acadian Flycatcher was flitting from branch to branch of a young beech tree, making the soft call that they usually do near the nest. This call sounds like phew! phew! rather than their usual explosive Pizza! 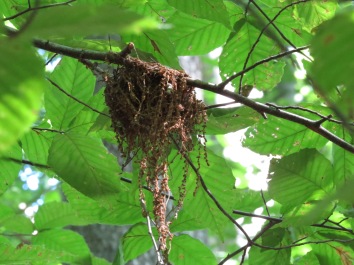 I searched for and found the nest in that young beech. The nest was disguised as a blob of wind-blown detritus caught on a twiggy fork about ten feet off the ground. Old brown oak bloom dangled from the blob. This is typical of Acadian nests—they’ll often have a long piece of dried grass or flower parts hanging below the supporting twigs. Perhaps that misleads nest predators like jays and crows into thinking this is only a piece of trash caught in the tree.

Acadian Flycatchers (Empidonax virescens) are small greenish birds with a pale eye ring and two pale wing bars. They like woods near water; our park fills the bill! No youngsters were visible in the nest’s shallow basket. Not wanting to spook the parent bird, I left the area but marked the spot. Yesterday I checked it again. An adult Acadian hung around and looked a bit anxious about my presence, but no heads popped up from the nest upon hearing the sweet phew call. Looks like the youngsters haven’t hatched yet. 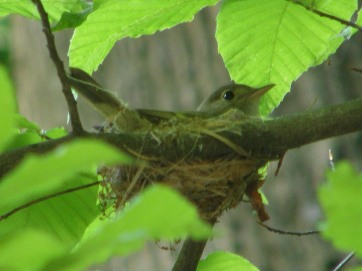 A few years ago, I lucked into finding an Acadian nest visible from the Henson Trail boardwalk. When I found it, the female was still incubating the eggs, a job that’s boring but restful, I suppose. 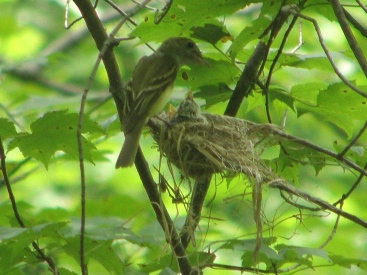 When the babies hatched, I managed to get a few pictures of parents bringing food. As the babies got larger, the nest seemed as crowded as Metro at rush hour.

After a couple of weeks in the nest, the youngsters started “branching.” They were well on their way to getting ready for that long migration to the tropics in the fall.

May all this year’s flycatcher nests be as successful as that one was. Flycatchers, which eat mostly insects and other arthropods, are more than welcome. I hope this year they’ll be especially fond of mosquitoes.