Recently, the grief and loss connected with two heart-felt deaths counter-weighted the joy in proud achievement as two grandchildren graduated. Two down, two up. It’s been an emotional roller-coaster time.

The only child of good friends died in an auto accident at 27; his parents were devastated. We went to Delaware to witness the celebration of Scott’s life. Family and friends met at their church, told stories about Scotty, wept with his parents. 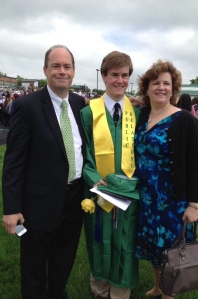 Zack and proud Mom and Dad

Shortly after that funeral, my grandson Zachary graduated from high school. “Pomp and Circumstances” ushered in a teary-eyed proud day, celebrating an important milestone on the road to maturity and independence.

Two weeks later, Lou’s older brother Ed died of congestive heart failure. Amid protestations that he and Ed were never close, being nine years apart in age, Lou remembered so many stories and incidents involving his brother that even he was surprised. Talking with family and friends at the funeral and interment, we heard more stories. Ed was still living in many minds and hearts and would go on being so. 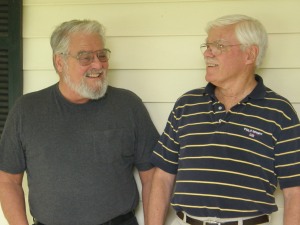 “Ed stories” included the time he loaned a teenaged Lou and his friend Jeff his brand-new Chevy convertible for a double-date (incredible!). Even Ed’s thoughts about space travel resonated with a newspaper article about current NASA plans concerned with Mars. Lou’s first reaction was, “Ed used to tell our mother he firmly believed we would land someone on Mars in his, Ed’s, lifetime.” “When did he say that?” I asked. “I think when Ed was in ROTC in college and I was in middle school.” So maybe 60 years ago, Ed had faith that he’d live to see people traversing space. And now he’s died at 81. And we’re not near Mars yet and won’t get there in Lou’s lifetime, either. Another reason to mourn.

Three days after Ed’s funeral in Virginia, I flew to California to watch my granddaughter Annika graduate from UC-San Diego. That was another proud day, full of photo ops and friends. That afternoon, we went sailing, with Annika still in the lacy dress she’d worn under her black gown.

I’m grateful that our two graduations helped leaven the funerals’ grief and encouraged thinking of all four events as thresholds. For Zachary entering college and Annika entering graduate school, the promise of a new and enlarged life is easy to see. In death, it’s not so obvious, despite religion’s tenets. Many faiths see death as promotion, but I don’t believe in life after death. After death, we exist in the acts and attitudes we’ve left as memories in the minds of others. Like the Scotty stories his photos and friends and parents told. Like the Ed stories we’ve been telling.

There’s a promise inherent in endings that result in new beginnings—if not for the lost one, at least for those left behind.